The Imperial War Museum of the North (Manchester) was again the venue for the North of England Regional Forum held on 8th May.   Entitled ‘When an Inspector Calls’, one current, three ex-inspectors and one professor shared their insights of the inspection process covering all the GxPs and the then current situation with ‘Brexit’.

Martin Reed, current MHRA GLP & GMP Inspector, opened the meeting setting the scene with ‘The Inspection Process’ explaining what to expect before, during and after a regulatory inspection.  Martin explained the risk-based approach taken by the MHRA for scheduling inspections, the allocation of inspectors and time required.  Based on his experiences, he described the best practices that he had observed in preparing for an inspection which also included computerised systems, specifically how direct access can be granted and how demonstrating the system (access controls, audit trails, data transfer) can be beneficial.  Martin finished with how to respond to inspection findings including CAPA.

Darren Jones, ex-GMP Inspector with the MHRA presented ‘Steriles Inspections: Current Expectations’ and although entitled for sterile inspections, there were various takeaways which could be applied to any quality system.  The first message was ‘don’t neglect the obvious’, as most deficiencies are based on simple non-compliance, following up with a reminder that regulatory expectations including responsibility of senior management, good quality culture and a good quality system go hand in hand, should be proactive and risk management.  Darren shared some of his experiences in performing inspections including the observing of work in a sterile environment and the lengths some organisations have gone to prevent an inspector seeing more than an operators back – nothing will stop an inspector seeing what they need to!  With the question ‘would you approve a facility you could not see?’, the session was wrapped up with the importance of self-inspection / internal audit as critical to the compliance of the facility.

On the day of the forum the UK should have left the EU but we had not; despite this and the unknown situation, Richard Funnel, former MHRA GMP Inspector gave an informative presentation ‘Brexit and IMPs’ covering the situation of a no-deal Brexit in handling IMPs both coming into the UK and exporting.  He explained what would happen to the current legislation, with the Medicines for Human Use (Clinical Trials) Regulation 2004 being updated to make sense in a non-EU context.  Richard also spoke about the difference between the EU and European Economic Area (EEA) and what ever happens there will be a one year transition period to implement guidance issued.

The afternoon sessions focused on data integrity with Martin Reed taking the floor once again presenting ‘Data Integrity for Laboratories’ which was based on the presentation at the MHRA GxP Laboratory symposium back in March. For those not present in March, the MHRA gave more insight into good practices that they have observed as the industry works with the guidance document.  The key message was to understand how processes and systems fit together from data collection through to archiving and the best practice observed was to map the process flow identifying:

Martin touched on how generating process maps should be a collaborative process involving all stakeholders i.e. IT, QA, system owner, system users.  His final statement was that data integrity controls should be embedded wherever possible into routine practice, and don’t forget about creating the quality culture.

As an ex-MHRA Inspector Neil Raw presented ‘Data Integrity & Risk – A Proportional Approach to Data Integrity’. Neil explained the differences between bad practice (i.e. no intent to deceive, harm or benefit) verses falsification (which includes one or more of the following - deliberate deception, pursuing a perceived or actual benefit), and hiding a perceived or actual weakness which can often be driven by opportunity, motivation or reward. Evaluating and determining intent is challenging and he suggested that a mechanism or framework for effectively assessing data integrity issues is required.  The good news is the criminal justice system has been thinking about the topic for hundreds (if not thousands) of years.  There is an established approach to classifying intent and degrees of deliberate action referred to as “mens rea”. Neil presented the mens rea as a model for determining Intent.  The model can be used in combination with the risk to patient safety or study impact to establish proportionality in evaluating data integrity issues. 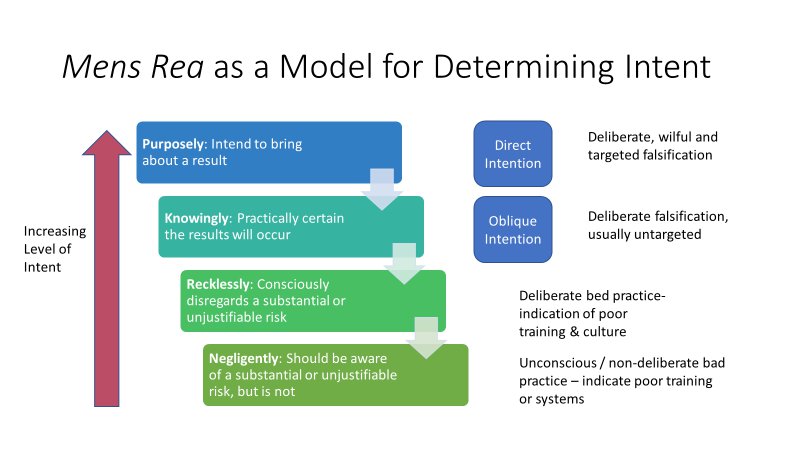 Neil concluded with the importance of establishing a proportional approach to mitigating data integrity findings in the form of procedures for how to handle and investigate issues.

The final presentation was called ‘Perspectives - the other side of the fence’, and was presented by Professor Miles D Witham, who describes himself as an academic who runs clinical trials.  He gave an insight of what it is like to experience an inspection, especially within academic institutions. He started with entertaining pictures of how participants of the inspection viewed the process and the inspectors, which we all related to. He continued with how an academic institution prepares for their first regulatory inspection and progressed to how they prepare now, and shared the key points learnt along the years which included;

•    Systems and processes are key – not just individual events or actions;
•    Evidence is also key – can you back up what you say happens / is supposed to        happen;
•    The trial/study you hope the inspectors don’t pick will always get picked;
•    Preparation is key.

The final session was an opportunity to ask the panel questions.  A number of questions had been received prior to the forum which were posed to the panel and led to some interesting discussions between the panel and the floor.

The RQA Office would like to extend their thanks to the team for all their hard work in developing the programme, arranging the speakers and facilitating the event.